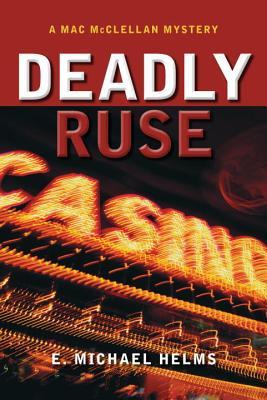 Kate Bell is taken by surprise by a ghost from her past- literally. While leaving the theater on a date with Mac, she is convinced she has seen her former boyfriend, Wes. The only problem is, he died twelve years ago in a boating accident.

Or did he? The more Mac investigates, the more the story begins to stink, and he soon finds himself embroiled in a maze of deception of epic proportions. Who exactly was Wes Harrison? Kate soon learns that he was not the man she thought she knew, and when they find a large bag of diamonds in Wes’ belongings, Mac knows they’re in way over their heads. He calls on the aid of Kate’s uncle, a private eye who takes Mac under his wing as a PI in training and helps him find the answers he needs.

Things really start to heat up when Mac is paid a surprise visit by the sexy yet mysterious Dakota, cousin to Sargent J.D. Owens, who appears to know more about what’s going on than she should. After her tips begin to pan out, Mac wonders just who exactly she is, and whether can she be trusted (and is it just Mac’s imagination, or is she following him?).

The closer Mac gets to the truth, the greater the danger he finds himself in. When someone makes an attempt on Kate’s life, Mac knows he must be close to the answer, but can he figure it all out before its too late?

Yet another great book from author E. Michael Helms. Fans of Deadly Catch will not be disappointed with this second book in the Mac McClellan Mystery series, which can also be read as a stand-alone. Full of familiar characters, as well as some colorful new ones, Deadly Ruse is a fast-paced mystery that will keep you on your toes. Highly recommended!

I have received a free copy of this book from the author in exchange for an honest review.

To read more reviews of this book on Goodreads.com, click HERE.

To purchase a copy of this book on Amazon.com, buy HERE.

E. Michael Helms is a USMC combat veteran. His memoir of the Vietnam War, “The Proud Bastards,” has been called “As powerful and compelling a battlefield memoir as any ever written … a modern military classic,” and has been in print for most of the past 20 years.
His work has also appeared in the books: “Semper Fi: Stories of U.S. Marines from Boot Camp to Battle” (Thunder’s Mouth Press, 2003); “Soldier’s Heart: Survivors’ Views of Combat Trauma” (The Sidran Press, 1995); and “Two Score and Ten: The Third Marine Division History” (Turner Publishing, 1992).
Book One of his two-part historical saga, “Of Blood and Brothers,” was released September 2013. Book Two followed in March 2014.
The first novel of his Mac McClellan Mystery series, “Deadly Catch,” was published in November 2013 and was Library Journal’s “Debut Mystery of the Month.” The second Mac McClellan Mystery, “Deadly Ruse,” is scheduled for Fall 2014.
“The Private War of Corporal Henson,” a semi-autobiographical fictional sequel to “The Proud Bastards,” will be published in June 2014.
Helms lives with his wife in the Upstate region of South Carolina in the foothills of the beautiful Blue Ridge Mountains, and continues to work on his mystery series.